Compiled by Michael Organ, with assistance from the artist

Zuzanna Lipinska (b.14 September 1946) is a poster artist who, from the last 1960s through to the early 80s produced a variety of movie and theatre posters in her native Poland. She is the daughter of the famous Polish poster artist Eryk Lipinski and his wife Ann Goslawska-Lipinska (1915-1975), also a graphic artist. Zuzanna currently resides in the United Kingdom. This web site contains information about her and some of her posters.

During February 2006 I purchased a poster off eBay of the 1968 Bulgarian film Tajemnice Kaliakry / Little Secrets, which was released the following year (1969) in Poland. My reasons for obtaining the item were purely personal - I liked its colouring and design, and was especially attracted to the late 1960s, slightly psychedelic imagery. These stylistic elements were very common in the West at that time, especially in rock music concert posters, however they seemed to be less common in Eastern Bloc countries such as Poland. This added to my interest in the poster.

When I received the item in April 2006 I noted that it was, unfortunately, without attribution - it did not bear any signature designating the artist involved in its design. This was surprising, as the majority of the graphically distinctive Polish movie posters from the post-World War II period through to the late 1980s bore the signature of the artist responsible. Despite a search on the internet, I was not able to identify the artist responsible for the work, not did I find any copies of the poster. I had reached a dead end.

Early in May I loaded a copy of the poster onto my Polish poster collection website and I was delighted when, shortly thereafter, I was contacted by Zuzanna Smith (nee Lipinska), the daughter of the famous Polish poster designer Eryk Lipinski (1908-1991). Zuzanna remembered her role in the creation of the poster, and these reminiscences are reproduced in detail below as I received them. I have also included some additional information in relation to Zuzanna's poster design work during the 1970s, along with reproductions of some of her film and theatre posters. The above photograph of Zuzanna Lipinska, then aged 22, dates from 1968 and the time of the creation of the Little Secrets poster.

The following is a copy of correspondence between the author and Zuzanna Smith in 2006.

14 May 2006 {Zuzanna Lipinska to Michael Organ}- "I saw a poster Tajemnice Kaliakry (Little Secrets) in your collection - author unknown. I have a strange feeling that it might be my poster, but I am not sure. It may seem strange that I don't remember, but it was ages ago. If it is not mine, it might be one of my colleague's, the poster is so incredibly familiar.

"I almost never signed my posters with  my full name, but if it is mine, there might be somewhere a little initial ZL. I would be very grateful if you could check if there are those initials anywhere. If not, I still think that I will be able to help you to find out who the author is. I remember the making of that poster.

15 May 2006: "I dug in my memory and I am almost completely sure that I did that poster. I will write to my friend in Poland who is a great collector of posters and has the whole list of all posters produced for CAF, the company distributing films, so I will be able to confirm it.

"The reason I had not signed the poster - even ZL - was that I was a student then and not allowed to work officially. Only members of the Artists Trade Union were allowed to be given commission for designing posters. My father was a well known poster designer (you have his posters - Eryk Lipinski) and he gave me his commission to do. So officially, on the CAF list, it is probably attributed to him, but obviously he had not signed it, since he had not done it. I will find out who the poster is officially attributed to. I will let you know - but I am sure now that it is mine.

"I worked as poster designer in Poland in the early seventies, mainly designing film and theatre posters. To become a film poster designer as a young art graduate, you had to become a member of the Artist Union, to start with. Then get your name on the list of potential designers and attend the screenings of the films, before they were released. After each screening, you put your name down on the list of people who saw the film, and then Mister Rog, who was responsible for giving commissions, would choose the designer.

"The designer would be given a set of films stills. Obviously American, French and Italian films were more popular and the screenings were crowded. If the film was very well known, the commission was given to a well known designer, even without him having to attend the screening. We, young unknown artists, were left with Bulgarian, Romanian and similar films, but every opportunity to design a film poster was thrilling.

"We had 2 weeks to do it. Posters were produced in 1:1 scale. In most cases the lettering was done by hand.

"In the case of Tajemnice Kaliakry, I asked the printer to set the type for me (it was set by hand then) and print several versions - I would give specifications about the typeface and the size, but the choice was incredibly limited. Later on Letraset came handy, but it was not available in Poland at that time, so we used to photograph the sheets of Letraset, and then print each letter to make whole words - it was necessary if you wanted a slightly different type. But most often, the best way to be in total control of the design was to do the lettering by hand.

"In the case of Tajemnice Kaliakry, I used the film still I was given, enlarged it and  pasted it on the black background. The shapes ware painted by hand and cut out, and then pasted. Because they were loose, it was easy to rearrange them as necessary. Then the lettering done by the printer was pasted on the black background. Obviously all the marks from the pasted things had to be retouched by the printers later on, but gluing things on the poster project was one of the most used techniques in the production process.

"So once the poster was done, it was presented in front of the panel of 4-6 well known poster designers and they would either accept it or reject it. Sometimes they would give a "distinction" if the poster was very good - which meant an additional 50% on your fee. A fee for poster design was just below a monthly average salary in Poland, so it was quite good.

"In case of Polish films, the directors often would choose a designer themselves to do the poster, and they had the final word.

"Posters were mounted or done directly on a stiff background, so they could be displayed in front of the judging panel. Each designer was given 10 copies of the printed poster. I am talking here about late 60s - early 70s - afterwards things were different.

The initial correspondence ended at this point. Some 16 posters have since been identified by this author, and they are listed below. The attendance of Zuzanna at the opening of an exhibition of her father's works at the Legnica Cultural Centre is reported here. In 2008, in collaboration with Anne Niesterowicz, she organised a retrospective of her mother's work at the Warsaw Museum of Caricature and Cartoon Art. She has also created here own website here: www.zuzannalipinska.com which includes stories of her life and photographs from her childhood, but primarily is an avenue for the presentation of an album of caricatures gathered by her over the more than 50 years from 1957. In 2012 an exhibition was held in London of Polish poster artists who have a relationship with the city. The website for the exhibition described Zuzanna as follows:

Zuzanna Lipinska studied poster design under Professor Józef Mroszczak at the Warsaw Academy of Fine Arts; now a poster designer, illustrator, and website designer. She collaborates with many companies and publishers in Poland and abroad, including Czytelnik, The National Theatre and Syrena Theatre in Warsaw. She has worked as a logo and poster designer for The Muzeum Karykatury, whose founder and first director was her father Eryk Lipinski, a famous illustrator, satirist and poster designer.

Zuzanna Lipinska and her father Eryk.

The following is a brief listing of known posters by Zuzanna Lipinska. Illustrations are provided where available, along with descriptive information such as size, print run, and date of production. Links to descriptions on the Cinemaposter.com site are given where available.

Produced on commission for CAF, through Zuzanna's father Eryk Lipinski. Zuzanna was a student at the time of the poster's production. A description of the creation of the poster by the artist is included in the correspondence above. A1 vertical = 23.1" x 32.5" (58.7 x 83 cm), color offset. Circulation : 8000. Film : "Heimlichkeiten", Bulgaria / West Germany (Sofia - Luna), 1968. Directed by Wolfgang Staudte. Starring : Apostel Karamitiew, Karl Michael Vogler, Reinhild Solf, Ani Bakalowa, Maja Dragomanska

Theatre poster for a French comedy. 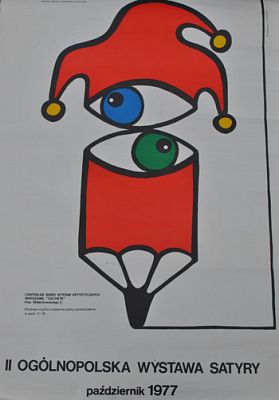 Poster for the Warsaw Museum of Caricature and Cartoon Art.